Millions of Americans proudly watched Dan O’Brien win the 1996 Olympic Gold Medal to become the first American winner in the Olympic Decathlon since 1976. Dan O’Brien was officially considered the “World’s Greatest Athlete,” and his name is forever synonymous with athletic achievement and success both on and off the field.

On Super Bowl Sunday early in 1992, Reebok introduced an unprecedented advertising campaign. This campaign featured Olympic hopefuls, Dan O’Brien & Dave Johnson in a series of entertaining TV and print ads featuring both athletes debating who would take the title as the “World’s Greatest Athlete” for the 1992 Olympics in Barcelona.

This publicity also provided for one of the most publicized failures in sports history when Dan failed to clear a height in the pole vault and did not qualify for the 1992 Olympic team headed for Barcelona. All of Dan’s hard work had come to an end…or had it?

Dan could have let this defeat define him, but he chose a different path. After the Barcelona Olympics, in 1992, he broke the world record in the Decathlon, He then went on to win the 1993 and 1995 World Championships, the 1994 Goodwill Games, and three US Championships – all leading to the 1996 Olympic Gold Medal in Atlanta.

Today Dan continues to give back to the sport that has given so much to him. He is the on-field emcee for every major USA Track & Field event. Dan also is a track and field commentator for ESPN, the ACC conference, and on field MC at Arizona State University for home outdoor meets. He also works very closely with the United States Olympic Committee as part of its Olympic Ambassador Program, mentoring current athletes in the areas of media training, preparation and peak performance.

Today Dan resides with his wife Leilani in Scottsdale, Arizona.

For the past 20 years Dan O’Brien has been a well sought after motivation speaker in the United States and abroad.

Adopted at the age of two, and raised in a home with seven other children of racially mixed backgrounds – Dan has overcome many adversities throughout his life. And with a great deal of self-determination and commitment, he has become one of the most successful and dominant athletes in the history of sports.

He has become an inspirational leader and motivational force for millions of people across the world.

Dan will detail his experiences in overcoming adversity, setting goals in the corporate world, and living like a champion! While also sharing stories about being the first reality star via Reebok’s “Dan vs. Dave” 1992 ad campaign and discussing the power of marketing.

To book Dan O’Brien as a keynote speaker, please use the booking button above.

HOW TO PARTNER WITH DAN 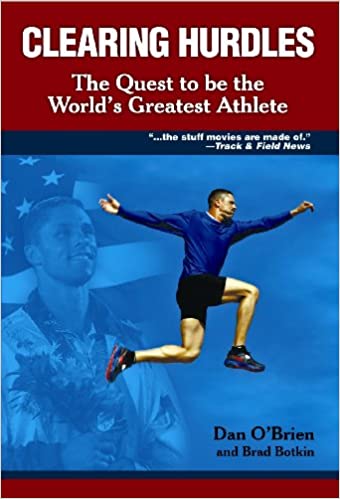 Clearing Hurdles: The Quest to Be The World’s Greatest Athlete
Hardcover – June 1, 2012

Other clients have included: