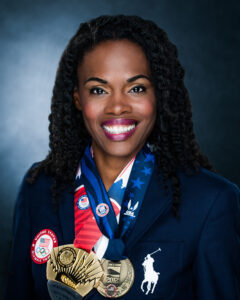 If there’s an art to staring down obstacles and coming out on top, Chaunte Lowe takes the Gold. The world-renowned high jumper has indeed conquered her share of barriers, racking up 4 Olympic Games Appearances, 3 American records, and several global accolades.  Many are surprised to learn that she achieved most of these accomplishments while also holding the title of “mother of three.”

When speaking, she is true to how she performs. She is animated, entertaining, and humorous. She dances and plays to the crowd as she shares her stories of beating impossible odds, time and time again. She possesses the ability to keep the group engaged and hanging on to her every word or jump. Those who get a chance to encounter her leave inspired and motivated. Her infectious personality is electrifying.  You can’t help but leave an interaction with her with a winning, “I can do ANYTHING” attitude.

Her performances on the field have earned her inductions in three separate halls of fame;  four invitations to be honored at the White House and featured in numerous publications, including The New York Times, Vogues, Glamour, and Sports Illustrated.

Chaunte would have never guessed, with all that she was able to accomplish, that her biggest obstacles would come off the track. In 2019, Lowe was rattled with the devastating diagnosis of triple-negative breast cancer, which is among the most aggressive forms.

In a state of disbelief, Chaunte was forced to take the crushing blow head-on, being forced to bow out of the national championships for a double mastectomy. The world championships were missed for chemotherapy. Still, in Chaunte fashion, she decided that she would fight against all odds and still train through chemo in hopes of making the delayed 2020 US Olympic team.

Now an inspirational speaker, her advocacy work focuses on early detection and breast cancer awareness with the end goal of saving lives. Reached hundreds of millions of people, she was honored with the NCAA Inspiration Award, The ‘Hero Among Us’ award, and was named to Georgia Tech’s 40 under 40 2021 Class.